a world of harness racing

Bunbury – A world of harness racing

Between the initial meeting to think about it and the first race meeting they had built a track, put a fence around it, had a covered area for a betting ring, a bar and a food bar, plus two wooden buildings which acted as a type of grandstand.The first race meeting was held on December 19, 1951.

Six races were held – three had 19 starters and three had 20 starters and the prizemoney was 60 pounds a race. There were many horses from two eighteen and better from Perth came down for the occasion.

Slow developments occurred after this and gradually the number of horses increased with more locals. The crowds increased and things were proceeding in a reasonable way.

Then on November 17, 2001 the track was extended and the layout of the stables was changed. Before this a new members’ stand had been erected and a covered area for the patrons. The new track was of the latest design in Europe where the tracks were mostly designed by Swedish engineers and were accepted as the world’s best, both to offer fast racing and protection for the horses.

So Bunbury achieved probably the best track in Australia.

Over recent years, following the improvement of the track, the number of horses in training in the area has increased and the attendance has increased. New stables have been erected and from the point of view of the racing and attention to horses, trainers and drivers things have gone a long way.

While the initial group that started the Bunbury Harness Racing Club would have been surprised at what they were able to accomplish in one year they would be equally as surprised to find the huge industry that has developed from the base that they lay.

Out of due acknowledgement for their efforts in starting there are amendments in the committee, they have the responsibility to enlarge the dream of the initial six people and provide the amenities that they were seeking when they started the Bunbury Trotting Club track at Donaldson Park. Dr Manea – Club Patron 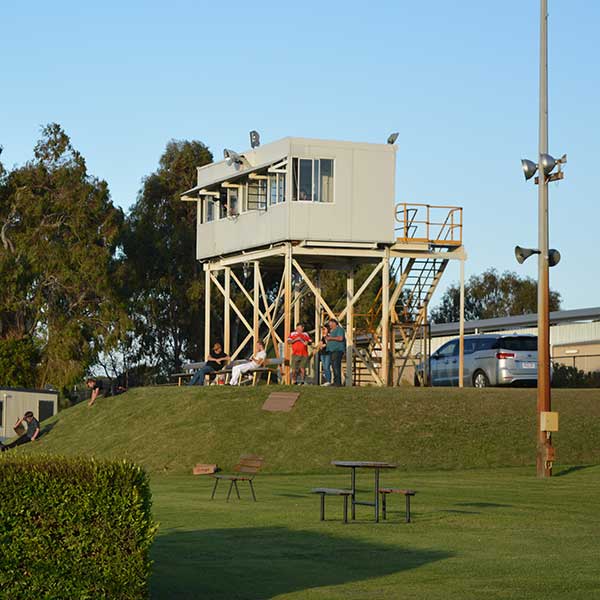 The Bunbury Trotting Club conducts 30 race meetings at Donaldson Park throughout the racing season which commences on 1 August each year and concludes on 31 July the following year.

All of these race meetings are broadcast nationally on Sky Racing Channel hitting every TAB Agency and PubTab in Australia as well as the homes and business premises of pay-for-use Foxtel customers.

With a membership exceeding 200 members and an average attendance level of 500 people per race meeting in the warmer months the Bunbury Trotting Club plays a significant role in WA harness racing industry as well as the local sporting and entertainment industry. The Club’s biggest on-course attendance is achieved on New Year’s Eve when 5,000 people descend on Donaldson Park for a great night of pacing and entertainment. The second best attended night is the Bunbury Pacing Cup held in December each year with an expected crowd of 3000 or more.

The future direction and management of the Bunbury Trotting Club is vested in the following people at the behest of the Members:

The day to day management and operation of the Club is undertaken by:

Got a question for us at the Bunbury Trotting Club? We’d love the hear from you.

Join our newsletters to be kept informed about news and events happening at the club.